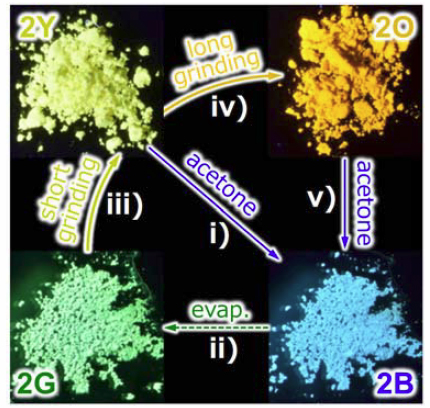 In this study, we report the interconvertible tetracolored solid state photoluminescence of gold(I) isocyanide complex 2 upon various external stimuli through solid state structural changes. Soaking complex 2 in acetone yields blue emission as a result of the formation of 2B. The subsequent removal of acetone yields 2G through a crystal-to-crystal phase transition, which exhibits green emission. This green-emitting solid 2G exhibits stepwise emission color changes to yellow and then to orange upon mechanical stimulation by ball-milling, which corresponds to the formation of 2Y and 2O, respectively. 2B could be recovered upon the addition of acetone to 2G, 2Y, and 2O. Thus, these four emitting solid states of 2 can be switched between repeatedly by means of acetone soaking and the application of mechanical stimulation. Importantly, single crystal and powder X-ray diffraction (PXRD) studies fully show the detailed molecular arrangements of 2B, 2G, and 2Y. This is the first mechanochromic compound to show interconvertible four color emission in the solid state. We also present the first example of using PXRD measurements and the Rietveld refinement technique for the structural analysis of a ground powder in a luminescence mechanochromism study. We obtained complete molecular-level structural information of the crystalline states of 2B, 2G, 2Y, and 2O. In comparison with a more solvophobic analogue 1, we suggest that the weak interaction of 2 with acetone in the solid state would allow a solvent inclusion/release mode, which is an important structural factor for the unprecedented multicolor mechanochromic luminescence.